Universities and research institutions in Switzerland

Religions (ISSN 2077-1444) is an international, open access scholarly journal, publishing peer reviewed studies of religious thought and practice. It is available online to promote critical, hermeneutical, historical, and constructive conversations. Religions publishes regular research papers, reviews, communications and reports on research projects. In addition, the journal accepts comprehensive book reviews by distinguished authors and discussions of important venues for the publication of scholarly work in the study of religion. Religions aims to serve the interests of a wide range of thoughtful readers and academic scholars of religion, as well as theologians, philosophers, social scientists, anthropologists, psychologists, neuroscientists and others interested in the multidisciplinary study of religions. Religions promotes interdisciplinary approaches to any of the world's religious/spiritual traditions, and invites contributions from scholars in various fields, notably: theology, comparative studies in religion and politics, theoretical or methodological discussions, thoughts, ideologies and philosophies, philosophy of religion, psychology of religion, history of religions, sociology of religion, role of religion in culture and society, religious ethics, religion and literature, religion and art, religion and linguistics, religion and health 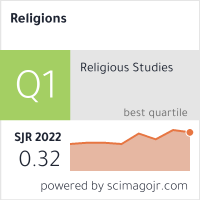 Explore, visually communicate and make sense of data with our new free tool.
Get it
Metrics based on Scopus® data as of April 2021
Loading comments…