Universities and research institutions in Canada

The University of Toronto Law Journal has taken a broad and visionary approach to legal scholarship since its beginnings in 1935. Its first editor, Professor WPM Kennedy, hoped that the journal would foster a knowledge of law “as [the] expression … of organized human life, of ordered progress, and of social justice.” The University of Toronto Law Journal has since established itself as a leading journal for theoretical, interdisciplinary, comparative, and other conceptually oriented inquiries into law and law reform. The Journal regularly publishes articles that study law from such perspectives as legal philosophy, law and economics, legal history, criminology, law and literature, and feminist analysis. Global in relevance, international in scope, it publishes work by highly regarded scholars from many countries, including Australia, Israel, Germany, New Zealand, the United States, and the United Kingdom. The University of Toronto Law Journal is currently ranked first among all general refereed law journals worldwide by the Washington and Lee most cited legal periodicals list, a position that it has held since 2007. UTLJ also received the highest ranking for journal quality from the Australian Research Council and is recommended to British law libraries by the Society of Legal Scholars. The University of Toronto Law Journal appears in numerous legal and social science databases, including Lexis, Westlaw, HeinOnline, JSTOR, Project Muse, and SCOPUS. 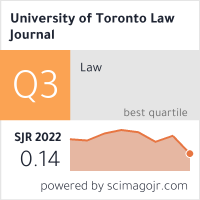 Show this widget in your own website
Just copy the code below and paste within your html code:
Metrics based on Scopus® data as of April 2020
Loading comments…