Universities and research institutions in Netherlands

Association for the Sociological Study of Jewry

Contemporary Jewry serves as the single source for the social scientific consideration of world Jewry, its institutions, trends, character, and concerns. In its pages can be found work by leading scholars and important new researchers from North America, Europe, Australasia and Israel. While much relevant scholarship about Jewry is published in general social science journals, as well as more narrowly focused periodicals, no single scholarly journal focuses primarily on the social scientific study of Jewry. Over 500 articles have been published in Contemporary Jewry since its inception. Each issue includes original research articles across a variety of social-science disciplines, including anthropology, demography, economics, education, ethnography, social history, politics, population, social psychology, and sociology. We are open to submissions of shorter research notes, and, on occasion, will publish important work that had originally appeared in Hebrew or other languages. Special issues have focused on such topics as the National Jewish Population Survey, Jewish community surveys, Ultra-Orthodox Jews, Women in the Holocaust, economic frameworks for understanding Jewry, and Jewry in Israel. Individual articles have treated a range of topics, from Jewish identity in Syria and the Ukraine to New Zealand and Israel; from an analysis of rabbis’ salaries to a historical study of Jewish women physicians in Central Europe; from survey research to ethnography to historical analysis. Each year Contemporary Jewry includes the Marshall Sklare Award lecture, delivered at the Association of Jewish Studies conference in co-sponsorship with the Association for the Social Scientific Study of Jewry, the founding association of the journal, by distinguished scholars chosen to receive the award because of their contributions to the field of the social scientific study of Jewry. The distinguished editorial board reflects the multi-disciplinary nature of the journal. 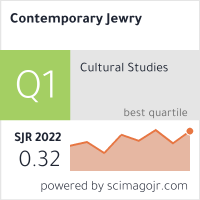