Universities and research institutions in Singapore

The Singapore Economic Review is a general economics journal devoted to quarterly publishing the best policy and applied economics papers, in addition to high-quality theoretical pieces. Widely regarded as a leading journal in the Asia-Pacific, it has a long history of publication on economic issues impinging on Southeast Asia and the broader Asia-Pacific region. Issues analysed are not specific only to Singapore but rather highlights rigorous empirical work across diverse economic issues of the contemporary world. This includes (but are not limited to) macroeconomic, microeconomic, financial and social aspects, with special emphasis on economic problems related to Asian countries. The journal also publishes papers of an interdisciplinary nature and welcomes this academic interface. It keeps scholars abreast of developments in the economic literature. Initially published as the Malayan Economic Review (MER) from 1956, the journal was subsequently renamed the Singapore Economic Review (SER) in 1969. Among its distinguished contributors were the late Sir John Hicks, Sydney Caine, the late H.G. Johnson, Ragnar Nurkse, H.W. Singer, W.M. Corden, Herbert Grubel, J.C.H. Fei, G. Ranis, Henry Wan, E.J. Mishan, Jerome L. Stein, Jack L. Knetsch, Ng Yew-Kwang, Murray Kemp, Karl Shell and Ronald I. McKinnon. The journal has a wide international circulation; among the many subscribers are the libraries of Harvard University, Stanford University and University of Oxford. The SER's editorial board consists of prominent scholars with different areas of specializations from across the world. With World Scientific as the journal's publisher, the Singapore Economic Review has sections devoted to public policy, applied economics, markets and industry, commentaries, and short papers or notes. The SER also publishes selected book reviews. In addition, specially invited papers by very eminent economists are featured. 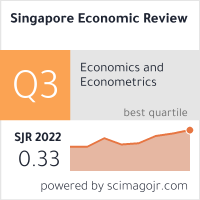 Explore, visually communicate and make sense of data with our new data visualization tool.
Metrics based on Scopus® data as of April 2022
Loading comments…