Universities and research institutions in Spain

Space and Time are two variables which, to a large extent, determine reality, make a mark on all its aspects, condition the opportunities and paths of people and societies, as well as those of thought, science, technology and many other manifestations of Reason, Freedom and Utopia. Education, a genuinely human phenomenon, is no stranger to such influences: it is a past and a present factor which is both conditioning and conditioned over the course of history and the present. Espacio, Tiempo y Educación is an open access, free and independent scientific journal, with a six-monthly periodicity (two issues every year) published by FahrenHouse (Salamanca, Spain). The main object of the journal consists in publishing researches, studies and critical essays about the History of Education, in any space and time, adopting theoretical, philosophical and methodological perspectives. Generally the structure of each number is composed by editorial, monographic, studies and interview. All items received by Espacio, Tiempo y Educación for the sections “Monographic” and “Studies” are submitted to the double blind peer review external evaluation process. Espacio, Tiempo y Educación accepts articles in different languages as Spanish, English, Italian and Portuguese (more information in “Guidelines for the Authors”). Espacio, Tiempo y Educación addresses mainly researchers, scholars and academics in the field of the History of Education, as well as other free and independent people who care about issues of thought, culture, society and education in a historical perspective and who are willing to debate their policies and researches with others. 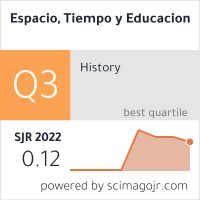