Journal “Pediatria” named after G.N. Speransky (the official short names of the Journal are “Journal «Pediatria»,” “Pediatria,” and “«Pediatria,» the Journal”) is the oldest Soviet-and-Russian (in the Russian Federation, the CIS and former Soviet Union) scientific and practical medical periodical assigned for pediatricians that is published continuously since May, 1922, and distributed worldwide. Our mission statement specifies that we aim to the ‘raising the level of skills and education of pediatricians, organizers of children’s health protection services, medicine scientists, lecturers and students of medical institutes for higher education, universities and colleges worldwide with an emphasis on Russian-speaking audience and specific, topical problems of children’s healthcare in Russia, the CIS, Baltic States and former Soviet Union Countries and their determination with the use of the World’s best practices in pediatrics.’ As part of this objective, the Editorial of the Journal «Pediatria» named after G.N. Speransky itself adopts a neutral position on issues treated within the Journal. The Journal serves to further academic discussions of topics, irrespective of their nature - whether religious, racial-, gender-based, environmental, ethical, political or other potentially or topically contentious subjects. The Journal is registered with the ISSN, - the international identifier for serials and other continuing resources, in the electronic and print world: ISSN 0031-403X (Print), and ISSN 1990-2182 (Online). The Journal was founded by the Academician, Dr. Georgiy Nestorovich SPERANSKY, in May, 1922. Now (since 1973) the Journal bears his honorary name. 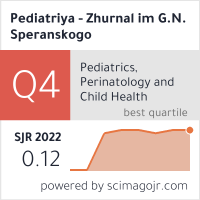